The Omega is the central commander of all Mimics appearing in Edge of Tomorrow.

The Omega is the central intelligence of the Mimics. It is a massive, hive-like organism that conceals a glowing brain-like core. An Omega is linked to all Mimics and possesses the ability to turn back time in order to continuously retry different battle strategies until the Mimics win. This ability has been used countless times by the Omega to allow the Mimics to lay siege to nearly all of Central Europe. It's highly intelligent and can quickly come up with different combat tactics. It can also track down and send manipulative visions to people infected with an Alpha's blood.

The Omega doesn't possess any abilities to defend itself from a threat. Instead it keeps itself hidden and relies on Alphas and Drones to protect it from danger.

Omega looks like a giant bio-mechanical structure with a giant sphere in the middle and long spikes that can close onto itself sticking out around its sides. 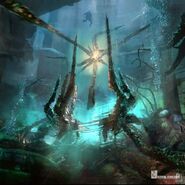 Ditto
Add a photo to this gallery
Retrieved from "https://allyouneediskill.fandom.com/wiki/Omega?oldid=4940"
Community content is available under CC-BY-SA unless otherwise noted.