Mimics are alien-engineered machines that travel to planets to terraform them in preparation for the arrival of their extraterrestrial colonizers. They can communicate to the past with tachyon signals and adapt to the host planet they are terraforming by merging with local life.

In the novel, Mimics look like bloated frogs slightly smaller than humans with four legs and a tail. They are extremely heavy and strong, being silicon-based life forms; their insides are filled with a sand-like substance. A 50 mm round is required to pierce their armor. In addition to all this, they can fire projectiles called javelins from vents in their body that have the equivalent power of a 40 mm round.

In the manga, Mimics look like giant spheres with a huge mouth. Besides a huge mouth, they lack any facial features on their outer shell, but do possess to what looks like multiple eyes around their mouth area. They have long spikes coming out of their lower area and they move through the environment by floating.

Mimics in the manga 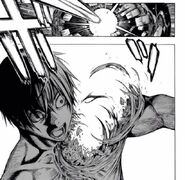 Mimics mouth close up
Add a photo to this gallery
Retrieved from "https://allyouneediskill.fandom.com/wiki/Mimics?oldid=4804"
Community content is available under CC-BY-SA unless otherwise noted.