Start a Wiki
Edge of Tomorrow (alternatively known by its tagline Live. Die. Repeat. and marketed as such on home release) is a 2014 American science fiction film starring Tom Cruise and Emily Blunt. Doug Liman directed the film based on a screenplay adapted from the 2004 Japanese light novel All You Need Is Kill by Hiroshi Sakurazaka. The film takes place in the year 2020 where Earth is invaded by an alien race called the Mimics, which hit Earth in 2015 via meteorite. Cruise plays Bill Cage, a public relations officer with no combat experience, who is ordered by his superior to film the first wave of a crucial landing operation against the aliens. Though Cage is killed in combat, he finds himself in a time loop that sends him back to the day preceding the battle every time he dies. Cage teams up with Special Forces warrior Rita Vrataski (Blunt) in seeking a way to defeat the extraterrestrials.

In late 2009, 3 Arts Productions purchased the rights to the novel and sold a spec script to the American studio Warner Bros.. The studio produced the film with the involvement of 3 Arts, the novel's publisher Viz Media, and Australian production company Village Roadshow. Filming began in late 2012, taking place in England at Leavesden Studios outside London, and other locations such as Trafalgar Square and Saunton Sands. Nine companies handled the visual effects.

The film was released in theaters on the weekend of May 30, 2014 in 28 territories, including the United Kingdom, Brazil, Germany, Spain, and Indonesia. On the weekend of June 6, 2014 it was released in 36 additional territories, including North America (United States and Canada), Australia, China, and Russia. The film grossed over $370 million in theaters worldwide and received generally positive reviews from critics.

In 2015, an extraterrestrial race called the Mimics have taken over Continental Europe. Five years later, the United Defense Force has only managed one victory, at Verdun, but has managed to hold the Mimics at the English Channel. In Britain, General Brigham, head of the UDF, orders Major William Cage, a public affairs officer with no combat experience, to cover the next day's massive assault on France. Cage objects to the dangerous assignment and threatens to put the blame on Brigham if the landing fails. Brigham orders the arrest of Cage, who is tasered when he attempts to escape. He awakes in handcuffs at Heathrow Airport. He has been demoted to private, labeled a deserter, and assigned to J Squad, under the command of Master Sergeant Farell.

The invasion proves to be a trap. Cage, despite his inexperience, manages to kill an unusually large Mimic with explosives and dies covered with its blood. He wakes up and finds himself back at Heathrow the previous morning. No one believes his story that the invasion is doomed. Cage repeats the loop of dying on the beach and waking at Heathrow over and over again, becoming more competent in combat and learning to predict what happens. In one loop, he encounters the famous Sergeant Rita Vrataski (the "Angel of Verdun") during the invasion. When she sees he knows the movements of an attacking Mimic in advance, she tells him to locate her the next time he "wakes up"; they both perish in an explosion.

When Cage next awakens, he finds Vrataski. She takes him to Dr. Carter, an expert in Mimic biology. Carter explains that the Mimics are a hive mind: if an "Alpha" is killed, the hive queen, the "Omega", turns time back a day, thus giving the Mimics a seemingly unbeatable advantage. Cage "hijacked" their ability by being doused in Alpha blood. Vrataski had herself gained this ability at Verdun, but lost it by receiving a blood transfusion after being wounded. She tells Cage that they must destroy the Omega.

Over many, many loops, Vrataski trains Cage to fight better. Frustrated by his continued failures, he retreats to London, but discovers the Mimics will attack there after defeating the invasion force. After having a vision of the Omega at a dam in Germany (which Carter said meant that the Omega was trying to locate him) Cage and Vrataski spend many loops figuring out how to get to the dam. Cage comes to know Vrataski, who is humorless and only interested in defeating the Mimics, having lost her loved one to them. Upon reaching a point where she dies whatever they do, Cage decides to hunt the Omega alone. When he reaches the dam, he discovers that it is a trap. Ambushed by an Alpha and another Mimic, Cage drowns himself before the Alpha can bleed him out and destroy his ability to reset time.

Cage and Vrataski infiltrate the UK Ministry of Defence to obtain a prototype built by Carter that can locate the Omega. Cage finally persuades General Brigham to give him the device, though his men then try to capture them. Cage discovers the Omega is under the Louvre Pyramid in Paris. However, Cage is captured and seriously injured. He wakes up in a hospital to find he has been given a transfusion.

Vrataski frees Cage. They recruit J Squad to help destroy the Omega before the invasion begins. They fly to Paris, where the other soldiers sacrifice themselves so Cage and Vrataski can get into the Louvre. Just before luring away an Alpha standing between them and the submerged Omega, Vrataski kisses Cage to thank him for getting her as far as he did. The Alpha kills Vrataski and mortally wounds Cage, but he manages to drop a belt of grenades, killing the Omega.

The dying Cage floats down through the water into the Omega's blood. He awakens en route to his first meeting with Brigham. Brigham announces on TV that Mimic activity has ceased following a mysterious energy surge in Paris. Cage goes to Heathrow to find Vrataski. She greets him rudely, just like in previous loops, to his amusement.

Edge of Tomorrow received critical acclaim. Critics praised the humor, the aliens' design, the performances of Cruise and Blunt, and the time-loop premise's ability to remain fresh. However, some critics had issues with the film's conclusion. Based on 279 reviews, review aggregation website Rotten Tomatoes reports that 91% of critics gave the film a positive review, with a rating average of 7.5 out of 10. The website's critical consensus reads: "Gripping, well-acted, funny, and clever, Edge of Tomorrow offers entertaining proof that Tom Cruise is still more than capable of shouldering the weight of a blockbuster action thriller." Another aggregator Metacritic surveyed 43 critics and assessed 35 reviews as positive and eight as mixed, with none negative. Based on the reviews, it gave the film a score of 71 out of 100, which it said indicated "generally favorable reviews".

Justin Chang of Variety called Edge of Tomorrow "a cleverly crafted and propulsively executed sci-fi thriller", saying that the film was director Doug Liman's best since The Bourne Identity (2002). Chang said that the screenwriters, with the assistance of the editors, "tell their story in a breezy narrative shorthand (and at times, sleight-of-hand), transforming what must surely be an unbelievably tedious gauntlet for our hero into a deft, playful and continually involving viewing experience". Regarding the relationship between Cruise and Blunt's characters, Chang said "Liman handles it with a pleasing lightness of touch that extends to the proceedings as a whole." He also commended the visual effects of the "expertly designed Mimics" as well as Dion Beebe's cinematography.

Todd McCarthy, writing for The Hollywood Reporter, said the film was "a narratively ambitious sci-fi actioner" that "takes a relatively playful attitude toward the familiar battle tropes". McCarthy said that, despite the humor, he found the time loop premise "tedious" and that "the final stretch becomes dramatically unconvincing and visually murky". However, he also called the effects "exciting, convincing and gritty" and applauded Gleeson and Paxton in their supporting roles. Kenneth Turan of the Los Angeles Times gave the film a positive review, considering the film "a star-driven mass-market entertainment that's smart, exciting and unexpected while not stinting on genre satisfactions" that broke a string of "cookie-cutter, been-there blockbusters".

In an interview with Collider, McQuarrie said that Cruise had an idea for a sequel, and that the concept is "locked and loaded". In April 2016, Doug Liman had signed on to direct the sequel, while Race screenwriters Joe Shrapnel and Anna Waterhouse will write the script for the film. In October 2016, Liman stated that the film would "revolutionize how people make sequels", and went on to say that the story is "much better than the original film" and that it's "a sequel that's a prequel". 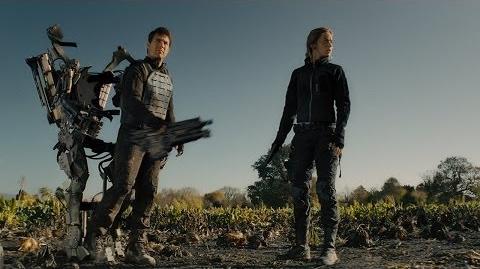 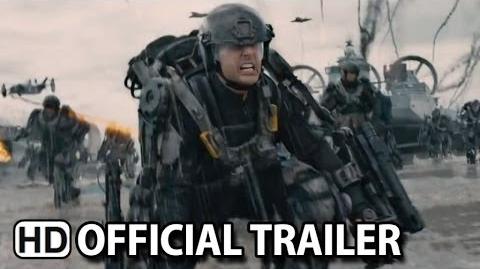 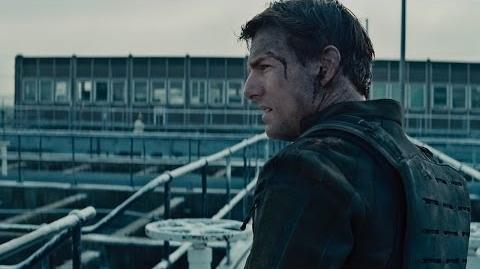 Edge of Tomorrow - IMAX Trailer HD
Add a photo to this gallery
Retrieved from "https://allyouneediskill.fandom.com/wiki/Edge_of_Tomorrow?oldid=4727"
Community content is available under CC-BY-SA unless otherwise noted.