Combat Jacket is highly advanced exoskeleton suit that enhances soldiers abilities in the battlefield. When wearing the suit, soldier can run faster, jump to extremely high heights, lift and push heavy objects. The suit also lets soldier to avoid damage when falling from great heights. The suits visor can show upcoming threats even in smoke. Jacket is powered by a sole unspecified battery that needs to be periodically replaced after the last one runs out of power. Without the battery the Jacket can't function and soldier inside of it becomes immobilized.

The suit is equipped with high calibre rifle and rocket launchers that are controlled from a small screen on right hand. What appears to be a black FN SCAR-H is seen as one of the more common weapons mounted on the UDF soldiers' "Combat Jacket", notably the one worn by Major William Cage. Cage later is seen removing the weapon and using it as a regular infantry weapon. Despite the fact that at one point it is referenced as using 5.56mm ammunition (suggesting that it is a SCAR-L), close examination of the magazine indicates that it is actually a 7.62x51mm SCAR-H. While mounted on an exoskeleton, the weapon visibly lacks the grip (as is normal for vehicle-mounted, remotely triggered machine guns), with the trigger assembly covered by a solenoid device; nevertheless, both the grip and a normal trigger reappear when Cage takes the rifle off. The suits interface comes in few different languages so soldiers of different nationalities could used it without hindrance.

Combat Jacket requires extensive training before operating in battle, because as shown when Cage first uses the suit, inexperienced soldier using Jacket becomes extremely clumsy and slow. While the suits enhances user capabilities it doesn't fully protect the wearier from all forms of damage. Grunt and Dog variants of the suit are especially vulnerable to damage. Cage was shown have broken back after being thrown into a wall while wearing the Jacket and numerous soldiers wearing Tank variants were immediately killed by a direct hit from a Mimic javelin. Because of the heavy weight, soldiers can easily drown in deep pools of water while wearing it (this nearly happens to Cage in one instance). The Jackets damaged electrical circuits can also shock the wearier to death (as seen by Cage on the beach). They can also get set on fire, causing the soldier inside to slowly burn to death.

Dog - Dog variant gets its name from a fully closed helmet that has painted canine skull on it. The suit is closely similar to the Grunt variant albeit lighter. The suit is issued only to most trained soldiers, and have heavier weaponry such as an arm mounted railgun in place of a SCAR-H and duel Angel Wings Railguns. Rita Vrataski wears a modified and recolored version of the suit albeit without the helmet.

Grunt - Grunt variant of Combat Jacket is the standard variant issued to soldiers in UDF. The suits are fitted with four weapons: A SCAR-H assault rifle with FN EGLM grenade launcher on the right arm, a triple-barrel cannon device on the left arm, an auto-cannon mounted on the right shoulder, and a 16-shot grenade/missile launcher on the left shoulder. They suits lacks any frontal or back protection except for a helmet.

Tank - Tank variant as the name suggests is the heaviest of the three and gives the most protection. The suit has metal plates around the user. The helmet has a cage like attachment around the face. Being bulkiest of the Jackets, the suit is not very agile. 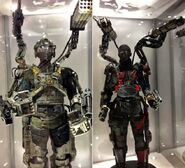 Cage leaving his Combat Jacket behind

Combat Jacket control screen
Add a photo to this gallery

Offline
Add a photo to this gallery
Retrieved from "https://allyouneediskill.fandom.com/wiki/Combat_Jacket?oldid=4869"
Community content is available under CC-BY-SA unless otherwise noted.